In an exclusive interview for CONUVIVE Mundial (United Nations World Council for Life and Truth), Dr. Astrid Stuckelberger talked about the findings made by her and several scientists around the world about the content of vaccines, mentioning from graphene oxide to parasites and biotechnology.

Orwell City brings one of the key excerpts from the interview.

Dr. Astrid Stucklberger: Now. So when you know that the graphene oxide is an accelerator and it can go very quickly in the tissue, and then you know that, scientifically, in the autopsy, after death… They have a forbidden autopsy for a long time because they knew that we wouldn’t find the virus. But now the scientists are looking at the… You know, they’re doing autopsies. So what they found is that the Spike protein is not just in one place (where you’re jabbed). They’re everywhere in the body. In the organs, in the tissues, and in all the liquids and the “plumbery.” And this isn’t normal.

OK, so that’s the first point. We can look at Spike protein and graphene oxide as a combination that goes in the whole body and the brain. But I’m not sure that the Spike protein is really the “killer.” But what Professor Bhakti says is that Spike protein triggers an auto-immune reaction. But we have no proof of this because there is no Spike… There’s no virus isolation. So I still have a doubt about this, and that’s just graphene oxide. But now… I’ll talk more about graphene oxide afterward.

But what I want to say is that another group of scientists in Germany, a pathologist, Professor Arne Burckhardt, and Professor Langer have made, together with Reiner Fuellmich —the lawyer— a press conference with an Electronic Microscope. They have taken the vaccine liquid, showed it on the screen, and confirmed the presence of graphene oxide in high doses. They have confirmed the presence of metals that have nothing to do with an experimental vaccine. It’s chrome and nickel. And they have found some type of parasites and, also, a transistor. And they said, “We have to investigate what’s this transistor.”

But when they made this “stage” on what’s in the vaccine, they said in the press conference that anybody… “Now that we have told them what’s in the vaccine… Anybody who’s doing this experimental vaccine and forcing it onto people will be accused on the international trial. Because they’re committing a crime since all those components are toxic for people.”

Working in a research group is like doing detective work. So now, the next group that did the same is Dr. Carrie Madej and Dr. Zalewski, who are… You know, one is an archaeologist. One was working in the laboratory of Pfizer. And then, Dr. Ariana Love. They have also looked into this in a different way. They put the parasite under the microscope at body temperature. And the eggs, because they found nano-eggs, nano… You know, more stuff in there. And they found that this egg at body temperature would become a parasite that would go out. And it’s Hydra Vulgaris.

And this is very, very strange. Very worrying. We have never seen this in any book of medicine. It was said by those experts. So this is another mystery. Then, there’s more in this vaccine than we know. And they have different lots with different… You know, batches with different risks of dying or not. That’s one thing.

Now, I have to come to the last part… The latest danger that we find now… And this is thanks to Professor Campra Madrid. His latest and final report is coming to a really, really interesting point. And it corresponds to what we call in the WHO, a chemical hazard. Because if you have a chemical intoxication or poisoning, it creates an infection. Or creates a heart attack. Or it creates this and that.

So what they found is that, in fact, this graphene has a potential, a power that makes (radiation) a thousand times higher because graphene is an ionizer. There’s an ionization. I’m not an expert, but I remember the concept. There’s an ionization that multiplies radiation 1000 times, which means that they have potentialized graphene. And it’s very sensitive to radiation. And according to the group in Spain, La Quinta Columna and Professor Campra, in fact, people are dying of acute radiation and not about anything else. Acute radiation. And radiation coagulates the blood, and it cannot be transported. And this is why footballers or sportspeople should stop sport if they got the vaccine. Because when they do sport, they accelerate their bodies, and the whole acceleration of radiation becomes so acute that the heart stops and they fall.

And I tell my friends, “You’re infectologists, you’re always talking more about the infectious diseases.” I tell them, “Do you really think that a footballer who drops dead on the football field… Did you think this is a virus? That it’s infectious? It’s not a virus. It’s impossible. You cannot just die from a heart attack because of an infectious disease. It’s a highly intoxicating chemical.”

So it’s very… We don’t know everything, but we know that the people who are vaccinated are at high risk of having a disease. And also of transmitting it to their partner if they’re sleeping with them. If they even hold hands. I have talked with doctors who told me that even couples that just hold hands. And one is vaccinated, and the other isn’t. The second comes and has a high level of D-dimer and graphene. 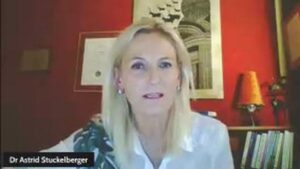