Intracranial Infection Cases Up 60-Fold Since Vaxxines Rolled Out

Intracranial Infection Cases Up 60-Fold Since Vaxxines Rolled Out

I got the message below from one of my followers. It’s an anecdote, but it is not an isolated incident as you’ll agree from reading the comments. A 60-fold increase in intracranial infections (5/month vs. 1 per year). Nobody can figure out why. Only started happening after the vaccines rolled out.

You won’t hear of this since the surgeons aren’t going to speak out since they’ll lose their license (as noted in the message). That doesn’t mean it isn’t happening.

Steve, I got this message from my neurosurgeon friend…

“I just took care of an 11-year-old African American cheerleader (she is a “flyer” which means she is the person who is lifted up into the air during a stunt; they are usually very strong and have excellent balance while in the air) in amazing health who had a headache. She got worse and mother brought her to my hospital. She was in a coma and had a brain abscess. I had to put a tube in her head to save her life. Pure pus from her head…. And MRI showed a brain abscess as well as sinusitis, and she had a tooth infection.”

So I called my friend (the anti-Vax NS) and said WTF: she said she operated in 5 kids like this in the past month! We see normally one a year. We both said at the same time, “Masks!”

So I wrote to another ped NS friend in the Midwest and this is what he just sent me:

“Yes, it is raining intracranial infections here. We just did one and have done 10-12 since October. This is weird as it’s the wrong season for them. We get them in spring and only a sprinkling of them. ENT is having a similar issue with severe sinusitis’s in kiddies. We asked ID and they just shrug their shoulders”. [Ed note: ID is short for infectious disease ]

Steve, I asked my neurosurgeon friend to call you as she is still pro vaccine despite what she is seeing with her own eyes, but she is afraid that she could jeopardize her license. The other NS recently got fired for not getting the jab, so maybe she would speak with you. Thank you.

The vaccination status of the patients wasn’t known (since we all know that the COVID vaccines never cause any bad effects, the physicians didn’t bother to ask such irrelevant questions).

According to my neurologist, the most likely cause is the vaccine, but masks could also be implicated (sinus infection that goes to the brain). She gave it 60:40 odds, where 60% it is the vaccine, 40% it is masks. Then I asked her about the COVID test swabs they stick up your nose and she said, “YES, that is a huge possibility.”

In short, it can be a combination of things. The vaccine weakens your immune system, the masking and/or swabs can initiate the infection, and perfect storm time… you get the result we see today.

In reading the comments, it’s also a mixed bag. Some implicate masks, others the vaccine (since it crosses the BBB and can cause inflammation). But it could potentially be PCR tests as well if you get a swab placed up your nose all the way.

Of course the CDC is never going to tell you any of this.

I was hypothesizing with the Mrs. I think it may be all 3.

In the lab, we saw in increase of unusual organisms on sinus infection and throat infection cultures pre-vaccine. We cultured several masks and grew several diverse organisms and environmental pathogens.

So, first, we know the masks were/are a breeding ground for an atypical mix/ratio of microbes, where they don’t belong.

Second- you and I well know that the vaccines alter the immune system’s ability to fight off many organisms. T cell and till like receptor dysregulation, lead to a weaken of our innate immune response.

Third- add to the perfect storm, of wrong flora, in the wrong location, a trauma to the nasal mucosa, allowing those organisms into a broken small vessel, adjacent to the olfactory bulb. The fatty rich nerve sheath gets secondarily colonized and allows the organisms to now climb into the usually sterile intra cranial space causing abscesses.

Children normal have a strong innate immune response. It is altered after the shots.

Kelli (the Mrs.) being reasonably mask compliant (probably microbially shifted in her flora), had a tech that ramroded her sinus and caused bleeding for our last Maui trip, where you and I spoke. After that, she had a persistent gasoline smell. She and I had Covid a month ago. While in the antibiotic azithromycin, her smell returned to normal. She has had to mask for a few things recently and the gasoline smell is returning (naso biome microbial bad shift again).

I think the cause can be one and two, two and three, or all three.

I would like to know from the neurosurgeons what organism(s) were cultured and grew from the abscess in each case, and assess the commonalities and differences of the microbial milieu.

The study would be-

Culture the throat and sinuses, to assess the microbial flora, of age controlled cohorts of

Compare the results to the organisms reported in the cases you presented from the docs and surgeons.

Something is indeed rotten in  state of “the neuronal vaults of” Denmark.

We need more data re this.

Brain abscess is typically a bacterial infection, and often can be related to otitis/ oral cavity infection. It can also be fungal. My guess is that if indeed there is an uptick in cases, the vaccine itself is unlikely to be a direct culprit; more likely some environmental factor, or potentially masking, if that can be shown to actually somehow be increasing cases of otitis media, or oropharyngeal infections, tooth decay, etc. Masking obviously is ineffective in mitigating upper respiratory dz transmission, but it’s actual harmfulness in the general healthy population running around with their faces covered with cloth beaks emblazoned with icons and butterflies, alone in their cars, and in supermarkets, etc, half off their nose, is hard to prove conclusively.

Brain abscess used to be more common a few decades ago, and has steadily decreased in frequency. We image people much sooner, and hygiene, in general, has improved. I do agree the CDC has proven quite unreliable, an understatement, in so many ways. If there is an increased incidence, it will probably be in the CDC data, they just may well not call attention to it, and hope it goes under the radar.

I called this out a year ago. Seems like so many patients were coming into the clinic with “sinusitis” – patients tend to overcall head congestion with a cold as sinusitis, but so many patients with the same complaint. I said I thought it was the masks but everyone shrugged it off. We know that anytime there is obstruction of normal outflow from the body, bacteria tend to colonize that area. And in a few unlucky people an infection can spread. I have never seen a brain abscess in someone who was not immunocompromised or an IV drug user. It can occur with protozoal infection but very rare in US. When you mess with Mother Nature, there are consequences. There’s a reason the Greeks saw hubris as a fatal character flaw. 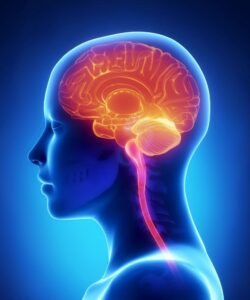