What Is Currently Happening With the C0VID Mandates and Protests Is Nearly Identical to What Happened 135 Years Ago With the Smallpox Vaxxine Campaigns, Where the Vaxxination Made Smallpox Epidemics Worse

What Is Currently Happening With the C0VID Mandates and Protests Is Nearly Identical to What Happened 135 Years Ago With the Smallpox Vaxxine Campaigns, Where the Vaxxination Made Smallpox Epidemics Worse

“What is currently happening with the COVID mandates and protests is nearly identical to what happened 135 years ago with the smallpox vaccine campaigns, where the vaccination made smallpox epidemics worse, the vaccines killed a lot of people, the public refused them and governments responded by harsher and harsher mandatory vaccination laws.

Eventually one of the largest protests of the century broke out in 1885, vaccine mandates were scrapped in one area in favor of alternative management of smallpox, and this is what actually ended smallpox.

My belief is that this is a very important message to get out to the current protest movement and will do a lot of good if it does.”

Moral of this story. Mass non-compliance ends the pandemic.

Do you remember how we got out of the mandates for smallpox? Most of my readers won’t remember it, probably because it happened over 135 years ago. Here’s the amazing story of what happened. 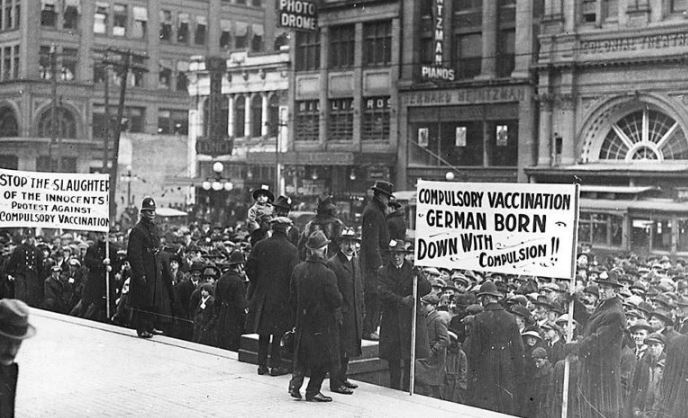 This insight comes from one of my readers, A Midwestern Doctor who Writes A’s Newsletter (which was just launched 3 hours ago).

In turn, he got it from the amazing book “Dissolving Illusions” by Dr. Suzanne Humphries and Roman Bystrianyk which describes the history of vaccines, public health, and the anti-vax movement (which started in the 1700s).

I wanted to share it with all of you because what happened over 135 years ago is very similar to what is happening now.

How they solved it 135 years ago

The solution then was not trying to convince decision makers using rational scientific arguments. It was a mass public protest that resulted in the abandonment of what the “experts” were saying to do and adoption of new methods that worked that were opposed by the medical community.

Here’s what A Midwestern Doctor wrote in the comments of my last article:

What is currently happening with the COVID mandates and protests is nearly identical to what happened 135 years ago with the smallpox vaccine campaigns, where the vaccination made smallpox epidemics worse, the vaccines killed a lot of people, the public refused them and governments responded by harsher and harsher mandatory vaccination laws.

Eventually one of the largest protests of the century broke out in 1885, vaccine mandates were scrapped in one area in favor of alternative management of smallpox, and this is what actually ended smallpox.

My belief is that this is a very important message to get out to the current protest movement and will do a lot of good if it does.

I wrote a 10 page concise but detailed and referenced summary of everything that happened I want to be made available (but I do not want credit for).

The entire summary can be found here and I would greatly appreciate it if you could bring awareness to this issue.

Your wish has been granted. I think we can all learn from what has worked before. You never know what will finally end up resolving this situation.

Will it be the truckers? Whistleblowers from inside the CDC, FDA, NIH, drug companies? Will it be embalmers speaking out? Will it be corruption of the DMED data? The life insurance companies figuring it out? Tech Review setting up a debate between our experts vs. Harvard and MIT experts? Tony Fauci finally admitting he screwed up by funding a deadly virus, pushing a deadly vaccine, and suppressing early treatments that worked? (ok, that last one was a joke).

There are a lot of possibilities here.

Here is the key paragraph right at the start if you are short on time:

Eventually, one of the largest protests of the century occurred in 1885 in Leicester (an English city). Leicester‘s government was replaced, mandatory vaccination abolished, and public health measures rejected by the medical community were implemented. These measures were highly successful, and once adopted globally ended the smallpox epidemic, something most erroneously believed arose from vaccination.

In short, what worked was a mass protest + implementing new health measures that were opposed by the medical community. When these measures worked, most people believed it was the vaccine that finally saved everyone.

An amazing number of parallels with what happened 135 years ago

As you read what happened 135 years ago, you’re going to be absolutely stunned by the similarities with what is happening today.

Here is one possible explanation for this:

Back then, vaccination made things worse so they doubled down on the intervention and required it for people. The result: even worse results. Nobody ever figured out the more you vaccinate, the worse things got:

By the end of 1868, more than 95 percent of the inhabitants of Chicago had been vaccinated. After the Great Fire of 1871 (it leveled the city), strict vaccine laws were passed, and vaccination was made a condition of receiving relief supplies. Chicago was then hit with a devastating smallpox epidemic in 1872 where over 2000 persons contracted smallpox, with over 25% dying, and the fatality rate among children under 5 being the highest ever recorded.

Here’s another snippet which reminds me of Senator Pan’s bill in California to eliminate the opt-out ability of people. The jail time reminds me of what DHS is contemplating now.

As widespread skepticism of the vaccination increased, enforcement increased, with no legal recourse available to opt out of the immunization regardless of the situation or physician recommendation. Reports are abound across the world of vaccination resistors being fined and jailed or forcefully vaccinated, with parents often opting to receive these punishments in order to spare their children from vaccination.

And another snippet reminds me of the truckers in Canada:

Tensions reached a boiling point and on March 23, 1885, a large protest estimated at 80,000 to 100,000 people erupted. It was composed of citizens of all professions from across England and received support from citizens across Europe who could not attend it. The procession was two miles long, with displays showing the popular sentiments against vaccination present throughout the crowd. The demonstration was successful, and the local government acceded to and acknowledged their demands for liberty. Many of the descriptions of this protest (and the jubilant mood there) are extremely similar to reports I have read of the Trucker’s protest.

Does this next snippet sound familiar? If the FDA meeting wasn’t postponed, we’d be at this spot in a few days from now except for us it would be 6 months rather than 3 months:

The manufacturing town of Leicester was subject to England’s 1840 law requiring immunization, and the 1859 law requiring every child to be vaccinated within 3 months of birth.

And I think this will sound very familiar as well; this may be where we are headed:

Assaults on officers enforcing vaccination occurred, and riots periodically broke out. This quote 1874 quote from Emeritus Professor F. W. Newman encapsulates the mood of the time: “Decorous and admissible language fails me, in alluding to that which might have seemed incredible thirty years ago—the commanding of vaccination on a second child of a family, when vaccination has killed the first; and then sending the father to prison for refusal.

Want to know how they solved it? Well, it sure wasn’t vaccination which the public (but not the lawmakers) realized was making the problem worse. Sound familiar?

Here are the interventions that finally solved the problem.

That year, following the protest, the government was replaced, mandates were terminated, and by 1887 vaccination coverage rates had dropped to 10%. To replace the vaccination model, the Leicester activists proposed a system of immediately quarantining smallpox patients, disinfection of their homes and quarantining of their contacts alongside improving public sanitation.

The medical community vehemently rejected this model, and zealously predicted Leicester’s “gigantic experiment” would soon result in a terrible “massacre,” especially in the unprotected children, who were viewed by government physicians as “bags of gunpowder” that could easily blow-up schools (along with much other hateful and hyperbolic rhetoric directed at them). This smallpox apocalypse would forever serve as a lesson against vaccine refusal the medical profession bet their stake upon.

As the predicted catastrophe failed to emerge, Leicester had dramatically lower rates of smallpox in subsequent epidemics than other fully vaccinated towns (ranging from 1/2 to 1/32). Various rationalizations were put forward to explain this, but as the decades went by, a gradual public acceptance of Leicester’s methods emerged, but even 30 years later, a New York Times article still predicted a disaster was right around the corner and it was imperative Leicester change their methods. Fortunately, the value of Leicester’s novel approach of quarantining and improving public hygiene was recognized and gradually adopted around the world, leading to the eventual eradication of smallpox.

History repeated itself again before COVID

A very similar history was repeated 33 years later, the very same strategy in 1918 Spanish flu. In 2020, a series of very revealing articles appeared on uncutnews.ch about it. Some are unfortunately only for those who understand German language, some were resourced from:

The Rockefellers and the military were equally very active in this ‘outbreak,’ with a plan which included masks and injections.

The whole writeup is 10 pages long. It’s a fascinating read and I hope you’ll take the time to read it. It ends with a summary of the parallels with today.

The lesson was not to rely on the medical experts and lawmakers for solutions; they promoted solutions that exacerbated the problems. The solutions that worked came from the people, and they were opposed by the mainstream establishment.

If you want to read the full story, you can buy the “Dissolving Illusions” book here. You can find the images here.

Thank you, A Midwestern Doctor, for an amazing piece of research and letting us know about the book and the story behind the book. I’ve subscribed to your Substack.

PrevPreviousTainting the Food & Water Supply: A Malevolent Attack Against Everything Good in Society – Naomi Wolf
NextIn 2021 a Scenario From the Munich Security Conference Predicted a Monkeypox Outbreak to the Exact DayNext