Human rights activists have expressed concern over the practice, calling it a violation of privacy

Australia found itself embroiled in yet another controversy this week after returning travelers claimed they were forced to hand over their phones and passwords to border officials at the airport.

One man told The Guardian on Tuesday that he and his partner were made to write down their phone passwords for border officials upon returning to Australia from a 10-day vacation in Fiji.

Upon giving officials their passwords, their phones were taken into a separate room for half an hour, where it was unclear what was being searched.

“We weren’t informed why they wanted to look at the phones. We were told nothing,” the man said, calling it a “gross violation of privacy.”

“Who knows what they’re taking out of it? With your phone and your passcode they have everything, access to your entire email history, saved passwords, banking, Medicare, myGov. There’s just so much scope,” he added.

Unfortunately, the practice is nothing new and Australian border officials have the power to request devices and passwords from incoming travelers, whether they’re Australian or not.

A spokesperson for the Australian Border Force told The Guardian that the practice was intended to “protect the Australian community from harm” and boasted that “information seized from passengers phones has contributed to the success of many domestic law enforcement operations targeting illegal activities.”

Journalists and human rights activists, however, condemned the practice, calling it “gross and abusive” and comparing Australia under the current Morrison government to an authoritarian dictatorship.

“Really concerning – this is what authoritarian countries do. Should not be happening in #Australia,” Human Rights Watch researcher Sophie McNeill wrote on Tuesday.

Journalists in particular – who have a duty to protect sources and other confidential information – expressed concern over the practice, with Australian reporter Jim Malo tweeting that it “feels kinda f**ked up that I’d feel the need to wipe my phone coming back into my own country.”

Others, including former Australian Senator Scott Ludlam, responded by calling for a bill of human rights in the country.

Australia has been at the center of several international controversies recently, including its decision this month to detain and deport celebrity tennis player Novak Djokovic, who was not vaccinated against Covid-19. 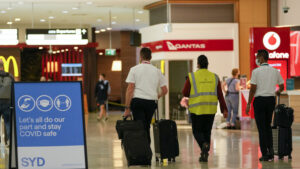