Dozens of House Democrats and Republicans are listed as advisers to a New York-based nonprofit group that counts a Chinese Communist Party-affiliated think tank as its partner.

The Humpty Dumpty Institute has since 2017 touted its partnership with the Beijing-based Taihe Institute think tank, which employs over a dozen current and former members of the CCP and People’s Liberation Army as senior fellows. The Taihe Institute was one of three Chinese think tanks behind an August report that deemed the United States a “failed country” for its pandemic response and claimed that COVID-19 leaked from a military base in Maryland.

HDI CEO Joseph Merante, a former career U.S. foreign service officer, spoke at the Taihe Institute’s annual Beijing-based Taihe Civilization Forum every year between 2017 and 2020. During his talk at the 2017 Taihe Civilizations Forum, Merante urged China to improve its “cultural soft power” and worldwide influence by making better use of cultural and artistic exchanges. And in his 2018 talk, Merante highlighted the HDI’s cooperation with Chinese businesses such as the video game developer Perfect World.

The HDI was christened with its intentionally “memorable” name in 1998 with the mission of “putting the pieces back together” of broken international relations and finding solutions to humanitarian problems. The group says it has hosted over 550 members of Congress and staffers for summits with senior United Nations officials, in addition to organizing Congressional delegations to more than 30 countries.

Members of the HDI Congressional Advisory Board, which as of late last week included seven Republicans and 26 Democrats, informally advise the nonprofit organization on its programming and are “active in HDI’s domestic and international activities,” the HDI said in November.

There is no evidence that HDI has ever sponsored congressional travel to China, and Republican members of the HDI Congressional Advisory Board told the Washington Examiner they weren’t aware of the group’s ties with the Taihe Institute, nor had they discussed any matters related to China with the group.

Maryland Republican Rep. Andy Harris said Tuesday he wasn’t even aware he was a member of the HDI’s Congressional Advisory Board and was looking to have his name removed from the board.

“It comes as a complete surprise to me that I am listed as a member. I was never notified by the Institute that I was named to the ‘Advisory Board,’ and I have had no interaction with the Institute at all since 2019, when I traveled on one sponsored trip to the Port of Antwerp as a member of the Ports Caucus,” Harris told the Washington Examiner.

Another Republican member of the HDI Congressional Advisory Board, Rep. Gus Bilirakis of Florida, said he submitted his resignation from the group after learning of HDI’s ties to China.

“I agreed to work with your organization to educate people on religious persecutions taking place throughout the world and to be an advocate for freedom,” Bilirakis wrote in a letter Saturday to the HDI. “So, you can imagine my alarm and distress when I learned about recent revelations of HDI’s connections to the Chinese Communist Party.”

“It is particularly abhorrent to me to be associated with an organization that has ties to a government widely known to actively support infanticide, engage in forced sterilization, exploit slave labor, and persecute religious minorities and political dissidents,” Bilirakis added in his letter.

None of the Democratic members of the HDI’s Congressional Advisory Board, which includes prominent liberal lawmakers such as Rep. Maxine Waters of California, Rep. Debbie Wasserman Schultz of Florida, and Rep. Mark Pocan of Wisconsin, returned requests for comment.

Democratic Rep. Al Green of Texas was removed from the HDI’s public-facing list of Congressional Advisory Board members sometime between Monday and Tuesday, but Green’s office did not return a request for comment asking if he resigned from his position on the advisory board.

The HDI issued a statement on Sunday saying it has never accepted any funds from the Taihe Institute or any Chinese Government organ or entity. The group added that it has collaborated with the Taiwanese government on humanitarian projects in Vietnam and Sri Lanka and has organized cultural programs in Taiwan.

The HDI also said in the statement it has never operated any program in mainland China, a claim that appears to conflict with a January 2015 statement in which the group announced that the Chinese video game developer Perfect World would represent HDI’s Higher Education Alliance program in Chinese universities as part of a five-year agreement struck between the two groups. HDI said in the statement Perfect World would help recruit Chinese universities and students to become part of its education alliance, which “helps create the next generation of global leaders by connecting institutions of higher education with the United Nations.”

Perfect World CEO Robert Xiao and Senior Vice President Ruby Wang joined the HDI board of directors as part of their 2015 agreement. Neither Xiao nor Wang remain on HDI’s board of directors, but Wang is currently listed as a Taihe Institute fellow.

In addition, the director of the Taihe Institute’s European Headquarters, Thorsten Jelinek, participated as a representative of HDI’s Chinese-based board members in March 2019, when the HDI signed an agreement with Peace Without Limits Dubai and the United Arab Emirates, according to a report by Cosmo DeNicola Companies.

Merante said his group stands by its Sunday press release when contacted by the Washington Examiner on Tuesday for comment.

Two Republican lawmakers that joined the HDI Congressional Advisory Board in November told the Washington Examiner that they would continue their affiliation with the group.

“After the Biden administration botched the Afghanistan withdrawal, I was pleased to work with any group willing to help confront the crisis,” said Rep. August Pfluger of Texas. “I am taking HDI at their word, and they have denied working with the CCP. If new information comes to light, I will reevaluate my position on the board.”

The other advisory board member, Rep. Don Bacon of Nebraska, said he was “satisfied” by HDI’s Sunday press release.

“The congressman was not aware of any reported relationship with the Taihe Institute when he joined. HDI has confirmed they have spoken on cultural diplomacy and the need for dialogue at conferences organized by Taihe but they have never accepted funding from Taihe or the PRC,” Bacon’s office said in a statement. “Rep. Bacon is satisfied with their explanation.” 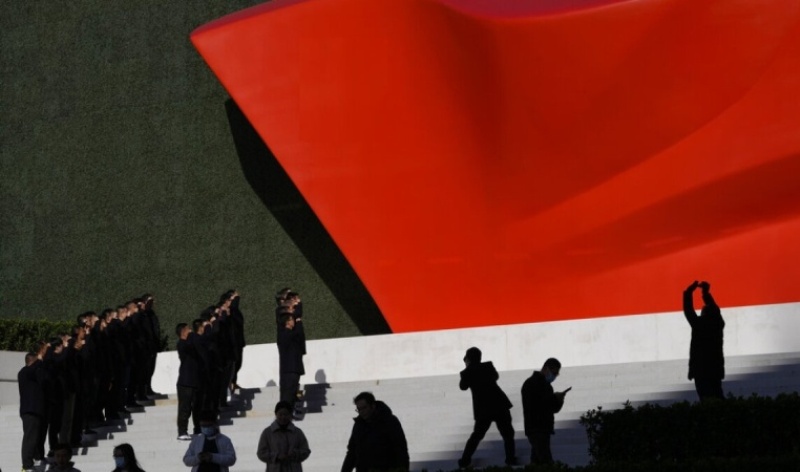