Either the Russian forces will reach their goals in Ukraine or Moscow and Kiev will reach an agreement in the near future, the Kremlin says.

Moscow hopes the Russian military operation in Ukraine might end in the near future, possibly “in the coming days,” Kremlin spokesman Dmitry Peskov told Sky News on Thursday. Either the country’s troops will end it by achieving their military goals or Moscow and Kiev will reach an agreement through negotiations, he added.

The prospect of a peace deal would largely depend on the “consistency” of Ukraine’s position and its willingness to agree to Russia’s terms, Peskov added. He particularly noted that those responsible for the crimes against civilians in the Donbass should be brought to justice.

When asked about accusations leveled by Kiev against Moscow over the alleged mass killings of civilians near Kiev, Peskov asserted that such claims are nothing but a “bold fake.”

“We deny the Russian military can have something in common with these atrocities and that dead bodies were shown on the streets of [the town of] Bucha,” he told Sky News. “We are living in days of fakes and lies,” he added.

Russia is “interested in a really independent and objective investigation of all the crimes” committed in Ukraine, Peskov said.

According to Peskov, one of the goals of the Russian operation has been to avert a larger conflict, namely a potential World War III that would likely involve nuclear strikes. Should Ukraine join NATO and then try to seize Crimea through military means, the bloc would have to defend it, he argued, adding that it could lead to a global conflict. Ukraine has been an “anti-Russian center” since 2014, the Kremlin spokesman said, arguing that NATO is not a purely defensive entity.

“It’s not a peaceful alliance. It was tailored for confrontation and the main purpose of its existence is to confront our country,” Peskov has said.

Peskov’s interview immediately drew criticism from UK officials. British MP Tom Tugendhat, the head of the Foreign Affairs Committee, has branded the Russian spokesman’s words “lies [that] aren’t meant to be believed.” Tugendhat took in the illegal Iraq War, as a member of the UK armed forces.

Russia launched a large-scale offensive against Ukraine in late February, following Ukraine’s failure to implement the terms of the Minsk agreements signed in 2014, and Russia’s eventual recognition of the Donbass republics of Donetsk and Lugansk. The German and French brokered Minsk Protocol was designed to regularize the status of the regions within the Ukrainian state.

Russia has now demanded that Ukraine officially declare itself a neutral country that will never join the US-led NATO military bloc. Kiev insists the Russian offensive was completely unprovoked and has denied claims it was planning to retake the two rebel regions by force. 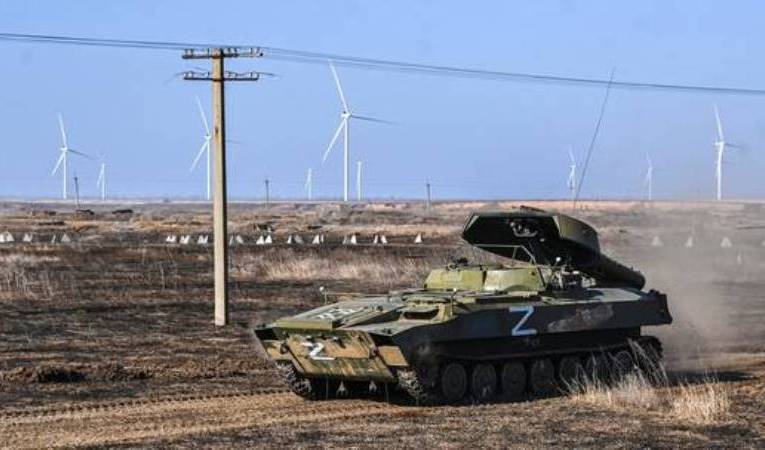