WOLF STONEHENGE
bidioten is selling his soiled depends for fertilizer

American pride
You don’t factor in the threat of Russia that is outnumbered by enemy of Russia. What if Putin is really sick and dying from cancer? What would be a good play by him? Drop an EMP over the United States knocking out every circuit within range of central America. Then every country that has no idea what happened will see the same fate leaving Russia untouched. What happens from one EMP? Billions will die.

glhorn
One last comment, regarding Russia. I don’t think they have the same goals as those other countries controlled by the global banking system, which include the US. Unlike most, they are supporting their Christian base (for one) and they currently have their own system of banking anyway. I think they are mostly afraid, Mike, of being forced into that global system controlled by the UN and Elite. And so from my view they are simply seeking isolation from that.

Ken
Thanks for the info Mike

Dawnie Rotten
LibTards are afraid of water, CO2, the Sun, Life, ect…..because they are NOT HUMAN! It SHOULD be CRYSTAL CLEAR, by now.
Crystal Clear…..that we are AT WAR…….NON HUMANS vs HUMANS! 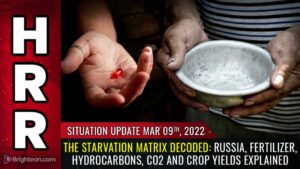