Ukrainian police have raided a private reproductive clinic that has been allegedly “selling babies” to China. While the suspects are accused of “human trafficking,” surrogate motherhood is a legal gray area in Ukraine.

The scandalous case was brought to light by the country’s interior ministry late on Saturday. The police broke up a “human-trafficking” ring that was centered at a private reproductive clinic in Kiev.

Further details on the case were shared by the Deputy Interior Minister Anton Gerashenko on his Facebook page. The ring involved the head of the clinic, her son, as well as two other Ukrainian and three Chinese nationals. They were charged with human trafficking that may lead to 12 years in prison with property confiscation.

The majority of the clinic’s clients were single Chinese males of “certain orientation,” as Gerashenko put it. While the exact number of trafficked babies remains unknown, at least 140 more Chinese nationals are under investigation, the official added.

The price tag for a single baby was about $50,000. The hefty sum covered artificial insemination of a surrogate mom, legal support and organization of fictive marriages needed to facilitate smuggling children abroad. It’s unclear if the babies’ fathers were the ones who then adopted them.

Five newborn babies, believed to be about to be trafficked, were found by the investigators in private apartments across the Ukrainian capital and placed in maternity hospitals.

While the suspects stand accused of “human trafficking,” there’s a catch – surrogate motherhood is not regulated by any laws in Ukraine and lies in a legal gray zone. As it’s not explicitly prohibited by law, nothing more than a simple contract between a surrogate mom and would-be foster parents is required. 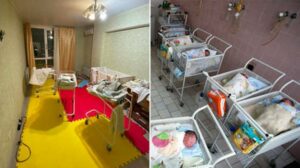