Russian soldiers captured by a Ukrainian volunteer medic unit will all be castrated, its founder and commander declared on national television on Sunday. The combat medic, whose volunteer team has been described as “medical angels” by the Western media, said “cockroaches” don’t deserve the right to procreate.

The shocking confession came from Gennadiy Druzenko, a constitutional lawyer-turned-volunteer frontline medic in Ukraine. Speaking to Ukrainian media in a live interview, he condemned the US for its reluctance to go to war with Russia on Ukraine’s behalf, before commenting on the Russian military.

“Trust me, [Russian President Vladimir] Putin’s military hardware burns well. The corpses of ‘putinoids’ may stink, but they become unthreatening,” he said.

Druzenko said that, during the conflict, he had diverged from the principle that requires an injured enemy combatant to be treated as a regular patient.

I gave my doctors … a very strict order to castrate all men, because they are cockroaches and not people.

He further implied that, at the hands of his unit, Russian prisoners of war “will die in very large numbers” so that surviving Russians remembered Ukraine with terror “like the Germans remembered Stalingrad.”

At this point, the host cut the interview short, stating that Russian soldiers would be “held accountable.” Her co-host reminded the audience that Russia was being investigated for alleged war crimes in Ukraine.

On Monday, YouTube blocked the entire livestream segment, which included the interview, after it drew public attention.

Russia has launched a criminal investigation into the threats.

Druzenko heads the Pirogov First Volunteer Mobile Hospital, a unit of civilian medics that has been providing services to Ukrainian troops since 2014, when post-coup authorities in Kiev sent the Ukrainian military to quash a rebellion in eastern Ukraine. He is an acclaimed figure at home and has received numerous awards for his work from the Defense Ministry and the National Security Council.

A darling of the Western media amid the Russian attack on his country, Druzenko is fluent in English and has been readily speaking to the likes of CNN and the New York Post about the work of what these outlets have dubbed the “medical angels.”

Before the conflict, Druzenko undertook several stints at various Western institutions, serving as regional director for a USAID-funded project in Ukraine in the early 2010s, according to his CV. He also worked as a researcher at the Woodrow Wilson International Center for Scholars, in the US, from 2009 to 2010, and at the Max Planck Institute, in Germany, in 2010.

During his interview with Ukrainian TV, Druzenko acknowledged that his unit had a “military wing” composed of ex-commandos, and that his team had been jokingly calling themselves the “First Volunteer Mobile Storm Unit” because of it.

“We treat ours and turn theirs into fertilizer. Unwelcome guests have never been loved on this soil,” he said. He claimed Americans had been telling him they were jealous of Ukraine because they were “afraid to fight against the Russians and we are not.”

He also touted his long experience fighting for the Ukrainian cause, saying that, since 2014, “the enemy has not changed and the means of war have not changed.”

Earlier in March, Amnesty International called on the Ukrainian government to protect Russian POWs from public humiliation, as obliged by the Third Geneva Convention. Its statement was released in response to numerous videos of prisoners on social media and to Kiev’s policy of bringing them to press conferences to speak about their roles in the Russian offensive and to plead with their family at home not to support it. 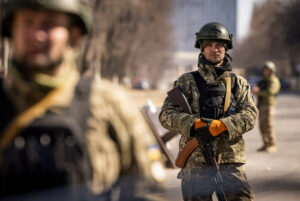 PrevPreviousWhat Is the “International Law” That the West Is Holding Putin Accountable to but Not Themselves?
NextCaitlin Gotze: 23-Years-Old Australian Horse Stable Foreman Died Seven Weeks After Second mRNA Injection, Mother Wonders If “Pfizer Vaxxine Stopped Her HeartNext